What’s in a Name? How Dr. B Named His Frenchies 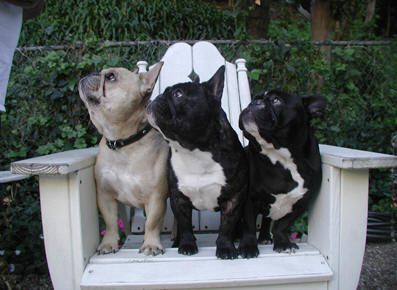 From the first day that Laila’s name appeared in a show catalogue, fellow exhibitors have asked me what is the meaning of Fessel’s — Nes Gadol Modani’s Laila Tov. What kind of name is that for a little French Bulldog? The answer is quite simple: Tradition!

We bought our first French Bulldog in June of 2003. On the way up to Apple Valley, Linda and I bandied back and forth about what we would name our new puppy. Most initial suggestions centered on French sounding names. But being somewhat Francophobic and wanting to provide a moniker that was unique, we let these names fall by the wayside quickly. We got to the kennel, decided to make the purchase, and then began our two hour drive back home, a chubby little four month old bulldog puppy comfortably nestled on Linda’s lap. The key word here is chubby, because that was her most distinguishing and appealing characteristic. It was a logical and easy decision to use the endearing Yiddish term for chubby, Fessala, to name our new puppy. The term stuck for a couple of days, but because it had three syllables, it didn’t quite roll off the tongue easily. Fessala quickly became Fessel, which morphed into Fessie.

Three years later, Fessie’s eighteen year old Toy Poodle companion, Jacques, died. Fessie reeled from the loss and went into a depression. I decided that not only did she need a companion, she needed a mate. Now Fessie is certainly the source of all beauty, and what she deserved was the handsomest of handsomes. Procuring a dog like this turned out to be a herculean task, for none of the breeders wanted to part with a specimen of that caliber. It was only a series of miraculous twists and turns that landed us in Fallbrook, where we got to view just what I was looking for. He was only three and a half month old, was twice the size of his littermates, and his fawn coloring showed his wrinkled brow to advantage. Immediately, we knew he was Gadi — a familiar name derived from the Hebrew word gadol, meaning big. Growing up, I learned that the most common usage of the word gadol was in the phrase nes gadol, which means big miracle. This phrase was used to describe the miracle of Hanukah, where a small amount of oil, which should have lasted only a day, managed to keep the eternal flame in the temple going for eight days. Considering the miraculous way that we found Gadi, and the fact that he didn’t urinate on our bedroom carpet in the middle of construction being done in our house at the time, we knew that we had a Nes Gadol Gadi.

It didn’t take long for Fessie and Gadi to bond, and when Fessie’s heat period arrived four months later, Gadi was up to the task. You might say that he rose to the challenge with a bang. Three weeks later an ultrasound revealed that Fessie was with child, four of them to be exact. In my paranoia of not wanting to operate on my own child when she needed a caesarian to deliver, and not wanting to put the intense pressure on my associates to be responsible for their boss’s dog during her delivery, I turned to an outside source of surgical specialists that we routinely refer clients to. In spite of these arrangements, something went terribly wrong and three of the puppies never awoke. It was like an atomic bomb had gone off inside of me. I was sick that Fessie had carried these babies to parturition only to have their lives snuffed out. But there was one survivor and I needed to convince myself to be thankful for that…..she would be the legacy for Fessie and Gadi. In the brainwashing effort that followed to reinforce that notion that we were lucky to have one survivor, the Hebrew phrase, modeh ani, I am grateful, kept coming to mind. It had always been a favorite of mine ever since I first heard Melanie use it during her days at Milken High School. Modeh Ani became Modani, which later was shortened to Modi. To this day, whenever the normal aggravations in life crop up, it is modeh ani that comes to mind to remind me of how much I have to be grateful for, and to put the problem into perspective. And it works.

Modi grew to be a beauty. And just like Fessie, she deserved to be mated to the handsomest of the handsomes. After a two year search, I procured the services of just the suitor that I wanted. Unbeknownst to me at the time that I had selected him, he had been one of the top French Bulldog show dogs in the country. He was a slightly smaller version of the fawn Gadi and I expected that the offspring would either be fawn or brindle, like Modi. To my surprise the two puppies that we delivered were as different as day and night in size and color, and that’s how they got their names: Boker Tov, or Good morning in Hebrew, was a brindle and his sister, Laila Tov, or Good Night, was shockingly a Pied. I later found out that their paternal grandfather was a pied who happened to also be a hot stud.

By the time Laila was two-and-a-half she had matured into arguably the nicest French Bulldog bitch in the country. Her achievements included a title of Grand Champion (Bronze Level) as well as garnering the Best of Opposite Sex title at the French Bulldog Club of America, New York Metropolitan Specialty Show which was held the day prior to The Westminster Dog Show, with all the same dogs competing. It was BIG! Although not as prestigious, it is Modi’s story that is actually sweeter. Modi eventually became a Champion in her own right, getting her final win at the Pasadena Kennel Club show at the age of seven years and four months of age. She didn’t start her show career until age six. One of my biggest thrills was watching the expressions on the judge’s faces when I told them her age. But perhaps the biggest reason for my elation at her crowning was the realization that this was one step closer to validating the greatness of the two who never got a chance to show the fancy what great champions they are…..of course, Fessie and Gadi.

And yet, with all of this tradition behind her, Laila’s handler, Renata, prefers to call her Porkchop!