The Year of Perfect Symmetry 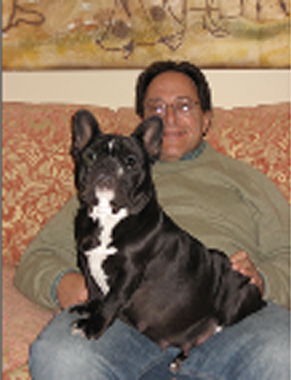 February 14, 2014 was celebrated in most households as Valentine’s Day. For some families it was celebrated as a romantic wedding anniversary. But in our household it was to be celebrated as the eleventh birthday of Fessie, the source of all beauty, for our family of French Bulldogs. IT WAS ONLY TWO DAYS AFTER OUR TRIUMPHANT RETURN FROM THE Westminster Kennel Club show and the French Bulldog Club of America’s New York Metro shows, where the current keeper of the genes, granddaughter Laila Tov, was named Best of Opposite Sex in the Sunday Specialty. I raced down the stairs to greet Fessie and her mate Gadi, eager to give Fessie a big birthday hug. To my horror, when she was stirred from her sleep she went into a grand mal seizure. I didn’t want to believe my eyes, but when a second seizure ensued on our way home from my animal hospital, I knew that I couldn’t just wish it away. Subsequent tests revealed the presence of a cancerous brain tumor and the following week a series of stereotactic radiation treatment were done.

It was a slow recovery, Fessie having been anesthetized five times in a ten day span, but with the help of medication to reduce the pressure in her skull she gradually regained her awareness and strength. A side effect of the medication was that it caused her to drink and urinate excessively and uncontrollably. Linda and I found ourselves soaking up the urine with towels, bath towels to be exact. Now, Linda is a meticulous homemaker, but her love for Fessie allowed her to overcome her aversion to the constant soaking up and cleaning. However, by the second week her original mantra of, “I love her so much that I don’t mind cleaning up after her,” had morphed into, “Your dog urinated on the floor again.”

We really had no idea of what to expect in terms of her longevity. We were hoping for four to six months of good quality of life for her. A running joke, as each day, week and month passed was how the original twelve thousand dollar cost of the treatment was being calculated and amortized on a per day basis. As the fourth month came to an end with Fessie back to her old self, I laughingly noted that we were now down to one hundred dollars a day……and it was worth it. After eight months, the daily tab was down to fifty dollars….what a bargain!

While all of this was transpiring, my attention turned to Laila and the prospect of her carrying on Fessie’s lineage. Linda had been a real trooper living in a four dog household. Four days a week, Laila’s brother, Boker, came visiting, and the canine population swelled to five and on Shabbat, our daughter, Hillary visited with her dog Kaya. The edict came down: no more than four permanent residents would be tolerated and so when Laila’s heat came on her third birthday, June 14, I postponed the tryst that had been prearranged with the French Bulldog Best of Breed Westminster winner who resided in Tennessee.

I knew that Fessie’s recovery could not last indefinitely and in my head I wanted to give special homage to her by naming Laila’s future litter, Fessie’s great grandchildren, something special. Even more than having the kennel name of Fessel be the first name of any of our dogs, I wanted more than ever for the puppies’ names to commemorate her spirit. It was while reading a book club selection, The Prime Ministers that the names came to me. In describing the wife of Israeli Prime Minister, Menachem Begin, it was said that she had the kindest and sweetest nefesh, or essence. While I had heard the word before in different prayers, I had never known its meaning. When I asked my daughter, Doctor Melanie, she offered two more Hebrew words that were almost synonymous — ruach (breath of life) and neshoma (soul). Now, if I was lucky enough for Laila to have at least three puppies, I now had suitable names.

During the summer, I arranged for Linda and me to fly to Nashville to meet up with my other daughter, Hillary, who was in the midst of a cross country road trip. The plan was to travel with her to Memphis and Little Rock but I also had an ulterior motive to join her on that particular leg of the journey. As I said earlier, Laila’s proposed mate lived outside of Nashville and although I had met the dog and his handler on two occasions at shows, I had never gotten a chance to meet his owners. As I explained to Linda, “These people are going to be like my in laws, I’d better find out what they’re like.” And not only were they nice, but also very interesting, having escaped the crushing of the Dubchek government in Czechoslovakia, during the Prague Spring in 1957, by virtue of having been in London at the time while attending a dog show.

Everything seemed all set as I waited for Laila’s next heat which was expected in mid to late January of 2015. And then several things happened which derailed the best laid plans………………… Fessie seemed better than ever, and we thought, maybe she has been cured, but on January 18th she had a series of seizures and we returned to reality. I was determined to give the radiation another try as it had succeeded beyond our original expectations. By a bizarre coincidence, Fessie’s scheduled MRI fell on the exact day and time that Linda had scheduled months earlier for her own elective surgery. It was quite a morning, dropping Linda off in Beverly Hills at six AM, returning to the house to pick up Fessie and then drop her off for her procedure in Culver City.

Rather than sit idly and ruminate, I decided to take a long bike ride and await the doctors’ calls to let me know that both patients were doing well. I was in Playa del Rey when I got the first call. I assumed that I was talking to Fessie’s radiologist, but after a few minutes of conversing, I realized that I was actually talking to Linda’s doctor when he told me that the nurse would be picking her up at two that afternoon. I said that there must be a mistake because I would be picking her up at two, and then I realized my faux pas.

Two days later, Fessie started the first of her three radiation treatments. This time her recovery has been slower and more difficult. Just as Fessie finished her treatments, Laila started her heat on February first. By timing her previous heats, I had calculated that she would be in her fertile period between the fourteenth to the sixteenth of February. The problem with that was that her boyfriend would be leaving Tennessee on the twelfth of February to come to New York to defend his Westminster Title and compete in the two Specialty shows that would precede Westminster on the fourteenth to the sixteenth of February. This meant that his owner would not be available to collect, prepare and send the semen out on the days that I (we) needed it. No problem I thought. Surely someone in New York City was a reproduction specialist and could do the job. But calls to the prestigious Animal Medical Center as well as other referral practices in Manhattan were to no avail. I even called my Westminster Kennel Club connection to see if any of the show’s vendors would include a reproduction service, but amazingly there was no one. (This was extremely mind blowing as practically every show that I attend on the West Coast includes a repro service as one of the vendors). But I did not stop to cry over lost love and quickly shifted to plan B by setting up a liaison with another handsome boy whom I had admired in local shows. Ironically we performed the artificial insemination on February fourteenth, Valentine’s Day, and of course Fessie’s twelfth birthday. How fitting it was that Fessie’s seed would go on in this manner.

As of this writing, I don’t know if the mating will be successful and I don’t know if Fessie will survive to see her great grandchildren…….and it may be better that I don’t know at this point. Why would I want to spoil such a beautiful story? A special thanks to my friend Dr Rachel Schocket, who after hearing the verbal rendition of this story, helped me frame the title and time span by saying that the story had such nice symmetry.