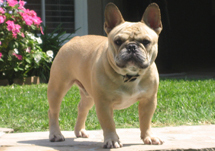 And who would that be?  It’s gotta be my Gadi!

Melanie describes Gadi as “socially awkward.”  In his seven years he has never given any family member (other than Fessie) anything resembling a lick, much less a kiss.  In times of turmoil, he’s the first one to run to his bed, usually carrying a stuffed toy as a security blanket.  The women in his life, his wife Fessie and his daughter Modi and his granddaughter Laila, are constantly clamoring for attention while he is content to watch from a distance.  Accidently bump one of his feet and he screams as if he is being murdered.  But, as good as the girls are as patients, the events of this week surprisingly show Gadi to be the real champ.

Gadi’s travails started about two weeks ago.  He started blinking his left eye and tearing.  He got some relief from antibiotic drops to the eye but using the island in the kitchen as an exam table along with Melanie’s high powered dental loupe light source, I could see that his cornea had a superficial ulceration.  I increased the frequency of the drops but it was to no avail.  Periods of normalcy were followed by a return of the symptoms.  To make matters worse, a small skin mass (that was initially misidentified as a tick) popped up on his inner thigh.  By the end of the week, I decided to bring him to the hospital to remove the mass.  I hoped to do it under a local anesthetic but didn’t really know how Gadi would deal with the situation.

To my amazement, Gadi couldn’t have been better.  Not only did he not flinch or resist when the local anesthetic was administered, he lay still during the entire ten minute procedure.  And when we found a smaller version of the same lesion on his left dewclaw his exemplary behavior continued.  A follow-up exam on his eye revealed partial healing of the ulcer as evidenced by early vascularization of the area.  (The cornea, or clear part of the eye’s surface, has no blood supply.  In order for healing of a wound to occur, it is imperative that small blood vessels that originate in the sclera, or white globe of the eye, infiltrate into the cornea to bring the necessary healing materials.)  I was relieved to see this and felt that healing was now a matter of days.  And then the second guessing began………………

“You’re not giving him the right medicines” Linda and Melanie said accusatorily.  And it looked like they were being proven right as his eye got worse over the weekend.  I decided that enough was enough and made arrangements to take Gadi to see Dr. Farrar, a local Veterinary Ophthalmologist.

She quickly determined that Gadi had an indolent or non-healing ulcer.  This generally occurs when the new surface cells that are trying to cover the corneal defect fail to adhere to the deeper tissue.  The treatment for this condition involves use of a scalpel blade to scrape away the non-adherent layer of cells of the cornea and go deep enough down into the healthy tissue to make a suitable surface for the epithelial cells to bind onto as they come to repopulate the area.  And all of this was to be done under a local anesthetic drop applied to the surface of the eye, while the patient remained awake!!

To say that Gadi was good would be an understatement.  To say that he was fantastic would be an understatement!  For goodness sake, not only did he keep his head in a fixed, rigid position but he didn’t even blink!!  He didn’t even rotate his eyeball!!  That’s how great he was.  But that was not all.  When the scraping and flushing of the eye was finished, a soft contact lens was placed over the surgical site!

I brought home an inflatable neck collar to be used if he starts to rub at the eye.  As of now, it’s still sitting on the table because the Champion during the procedure has been the Grand Champion of recuperation.

One final note about motherly compassion. Several years ago, both my son Stephen and I had wisdom teeth extracted.  We were given Vicodin to take post operatively to relieve discomfort.  We were only permitted to take a single dose before Linda hid the medication under the guise of preventing drug abuse.  Yet, with Gadi, she not only makes his pain relief medication available, she is insistent that he get it regularly.

For more photos of Gadi and his family: