The Last Patient – A Dental Tale by Dr. Baum 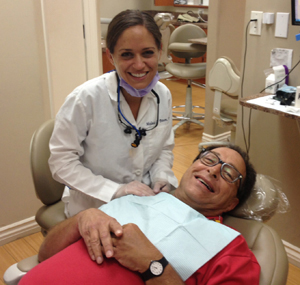 No…it’s not what you think. This has nothing to do with seeing my last patient. Rather, it concerns me being the last patient, of my daughter, Dr. Melanie Baum DDS.

She had decided to leave general dentistry and embark on a three year residency in Orthodonture at Montefiore Hospital, in The Bronx. Her acceptance into the program stirred mixed emotions for Linda and me. Who knows how our lives would be when she returned, if she returned.

Happily, I rarely have a dental problem, and my teeth are in good shape. So I had no occasion to avail myself of Dr Baum’s services during her year-and-a-half tenure at Trident Dental in West Los Angeles. Other family members and friends had gone to see her for various procedures, and their glowing reports made me even prouder of her accomplishments. Linda, having a fierce loyalty to her longtime dentist, remained a proud mother, rather than a patient. When she finally realized that she would forever miss out on the opportunity to be her daughter’s patient she patronizingly tried to set up a cleaning appointment for Dr Baum to do. Of course, at that point, Dr Baum didn’t do cleanings anymore, for that was the responsibility of the hygienists. I compared making an appointment with Melanie doing a teeth cleaning to making an appointment with me to do a nail clipping, and Linda understood.

It looked like I, too, would miss out on experiencing Dr Baum’s professional services until I chomped down on a tootsie roll that had been left on my desk at work. Out came a large filling, leaving a cavernous defect in my left lower premolar tooth. There was no escaping it – it would need to be seen by the dentist. Luckily for me, there was no pain involved as a result of the incident, and after Melanie checked it out during Shabbat dinner that night, I made arrangements to see her at her office the following week.

The first thing that I noticed during Melanie’s initial exam was how small her fingers felt in comparison to the stockier (and hairier) fingers of the male dentists that had previously worked in my mouth. As a dental patient, I never employ the head phones or videos that are available to distract one from the dental procedures. Rather, I just recline and close my eyes. Ironically, I keep my mouth shut by keeping it open. During the procedure I was able to listen to Melanie as she calmly and clearly gave her assistants instructions. Her manner and tone those were of a confident person. But what made me proudest was the kindness and consideration that she showed to her support staff; she always said “Please” and “Thank you,” and complimented them on tasks well done. No wonder she had happy and pleasant people working along with her.

Complimenting and positive reinforcement to her support staff was a message that I had repeated to her ad nauseum, and obviously the message had gotten across. Ironically, she never got to see me employ this behavior in my own practice as she never visited me while I was working. But I now realized that the message had gotten through to her all the same. All the while as she was drilling the tooth to prepare it for the new filling, I said a silent prayer that the narrow cusp that was left of the original tooth would not fracture, and my prayers were answered. Incidentally, I received feedback from the good doctor complimenting me on excellent tongue movement which made the doctor’s work easier. I was so impressed by the experience that I asked her to check three other areas in my mouth where there were food traps. On inspecting the areas, she made what I assumed was a standard dental quip. “It looks like you have a whole meal in there,” she said with a chuckle. But, it turned out that it was the humorous ad lib of a relaxed and confident person. “I can fix everything for you by replacing the fillings that are not fully in contact and by replacing a crown……I’m a perfectionist, you know.” And so, I scheduled the work for the next week….on the last day she would be practicing as a general dentist.

The next appointment was a marathon four hour event, but in the end, I left with two new fillings that abutted perfectly, as well as a new crown that was made during my appointment. Thanks to the excellent work of my daughter, I expect to see a precipitous drop in tooth pick purchases. Her future orthodonture patients will be lucky to have such a kind and competent doctor.