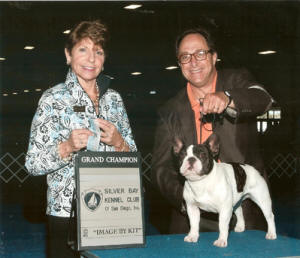 In the forty years that I have lived in California I have driven to and from San Diego on many occasions. Several landmarks on the journey stand out in my memory: the San Onofre Nuclear Power Plant followed by the expanse and isolation of Camp Pendleton and lastly the Grandstand of the Del Mar Racetrack.

The Silver Bay Kennel Club of San Diego holds their annual show on the fairgrounds adjacent to the Del Mar Racetrack. The racetrack was created in1937 by a host of Hollywood celebrities stemming from their passion for Thoroughbred horse racing. Luminaries such as Bing Crosby, Pat O’Brien, Jimmy Durante and Oliver Hardy lend their names to exhibit halls or thoroughfares in the area.

Aside from my excitement about the venue, the two shows that weekend offered something really special, the opportunity for Laila to attain her Grand Championship and for her mother Modi, to win her championship. Both objectives were at least possible, but the competition would be tough. Forty six French Bulldog entrants would be competing. In the Best of Breed competition Laila was up against five other champion bitches; and four of them had already attained the Grand Champion title! In order for Modi to win her championship she had to be Winner’s Bitch (the best non champion female) in both shows and there were 19 competitors in each show. On top of that, I would be the one to show Modi as her handlers were away at a circuit of shows in the Midwest.

I had worked with Modi at home for the previous week using string cheese as bait. She really loved that string cheese- and so did I. Not only could I snack on it myself but it was ideal to hold- it never stuck to your fingers and by tearing it lengthwise you could retain control of the morsel even though half of it might be in her mouth. When trying to strike that perfect pose, or stack, as it is called, I discovered that she didn’t like to have her feet moved by manipulating her limbs anywhere near her paws, but was very compliant when the limb was moved by handling the shoulder or the hip. All the while, I tried to incorporate the energy and fun of Jenny Wornall with the Svengali eye contact of her father, Wood.

Prior to our departure from Los Angeles early Friday afternoon, I had made arrangements with Laila’s handler, Renata, to meet later in the afternoon at the showgrounds. But first, we had to check into to our hotel in Del Mar. When you are traveling with two show French Bulldogs could there possibly be a more appropriately named place to stay than L’Auberge of Del Mar? After checking in and getting the room in order, Modi, Laila and I headed off to meet up with Renata, while Linda got some much needed rest. In fact, her participation in this particular whole trip was really touch and go until the last moment as she was barely recovering from a severe respiratory infection.

The trip to the fairgrounds gave Laila and Renata some time to reacquaint, while it gave Modi time to get familiar with the surroundings. It also gave me the opportunity to get some pointers about the techniques involved in getting the best performance out of Modi the next day.

Upon returning to L’Auberge, I found Linda in severe pain emanating below her rib cage. During a spate of sneezing and coughing, she must have torn a muscle. Meanwhile the dogs were getting acclimated to being “city dogs,” dogs that needed to be walked on a leash to void. Laila has always been private about her bodily functions, always seeking the solitude of flower beds and shrubbery, which is enabled by the free access to our yard. On our midnight run to the roses, before going to sleep, Modi cried out while running down some stairs and although she didn’t limp, I could see that something was bothering her. Our room was becoming an infirmary ward — Linda with pain in the front and Modi with pain in the back.

As it turned out, the first day of showing was a total bust. Modi was trying hard, but I could see in her eyes that something was bothering her. Laila looked good, but evidently not good enough to place. If we had tails that were long enough, we would have been dragging them back to the hotel. No championship for Modi this weekend, but Laila still had a chance the next day. On a positive note, my friend Marcel showed me how to put on an armband, in this case #46, without having to ask for assistance. Quite an accomplishment!

Sunday didn’t start off so great as Linda didn’t feel well enough to go to the show. Modi and I dropped Laila off with Renata, and proceeded to walk around the show rings on our ritualistic “calm down” tour. Today we were being evaluated by Judge Sue Goldberg. She had seen a prepubescent Laila about a year earlier at a show in Pomona. But before Laila would enter the ring with Renata in the Best of Breed competition, it was Modi and I who met the good judge first.

I learned an interesting lesson at this meeting. “Never wear clothes that are the same color as your dog” she told me as she looked at my brown and black sport jacket and Modi’s brindle coat. “It gives the judge the impression that you are trying to camouflage a defect.” Ironically, I had considered showing Modi dressed as my alter ego, Dr. Baum, who only wears white! Hmmm……

Modi didn’t place that day either and we settled back to watch Laila and Renata. When it was over, Laila had been named Select Bitch and the points she won put her over the top for the requirements to gain her Grand Championship! Yes!! But the interesting twists continued. When we were taking the winning photo with the caption of Grand Champion, Judge Goldberg confided that her son’s wife was a Baum before she became a Goldberg and that they lived very close to where I had grown up. No relation though. The second twist concerned the winner of the Select Dog title that day, for he, too, attained his Grand Championship with the win. He’s the closest thing to a boyfriend for Laila. They formed a mutual attraction at a show in Ventura six months earlier and have actually rubbed noses on two other occasions.

You can be sure that we’ll be looking for him at the Specialty shows In Vallejo in May.

Since the show, I have been using the Select Ribbon as my bookmark so every day I can reflect on how terrific an achievement this has been.

For more pictures of the darling girls, brother Boker, Modi and their whole family, click the Frenchie Dog Pix and Laila & Parents buttons! What happened next on the doggie show adventure trail? Click here to find out! And to read the story of her first great success, click here!