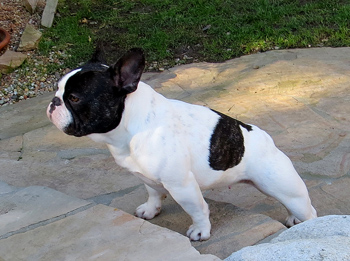 The Tale of Laila, Modi and ….

Seaside Park in Ventura, California has always been one of my favorite venues. First of all, an early morning Saturday or Sunday drive up the coast (with no traffic) as the sun comes up behind you is always enjoyable. Secondly, Seaside Park is always cooled by ocean breezes and has buildings suited for indoor showing. However, what will make this venue ever so special in my heart were the events that would transpire during the weekend.

Two weeks earlier at a series of shows in Palm Springs, Laila had continued in her winning ways and her mother Modi had returned to the ring after a four year absence. During her hiatus from the ring, Modi had taken time out to raise a family, namely Laila and her brother Boker (under the watchful eyes of her parents Fessie and Gadi). Both of the girls are beauties, but in very different ways. Laila is very feminine; kind of a Shirley Temple sort of girl. Mother Modi, on the other hand is more like Xena, the Warrior Princess, powerfully built with an attitude to match. In dog fancy parlance, Modi is a real “doggie bitch.” I expected Laila to do well but Modi was the real wild card in these two shows.

In order to get the dogs situated in time for the 8 a.m. showing of the French Bulldogs, I had to leave my house at 6 a.m. I had come down with a pretty severe head cold two days earlier which caused my wife Linda to sleep in one of our daughters’ vacant bedrooms. As a dutiful (and loving) husband I stopped by to say good bye and obnoxiously smother her with kisses. You can imagine my surprise when I found that I had picked the wrong bedroom and that the object of my affection was my son’s friend, Jessie, who had slept over after a night of carousing. You can only imagine his surprise at being pounced on by an amorous husband at six that morning! I did eventually find Linda without further incident.

When I got to the show grounds, I walked both dogs to give them time to relieve themselves. I dropped Laila off and proceeded to walk Modi around until she relaxed- which only took another fifteen minutes. I ran into a couple of handlers who had previously seen me at other shows with Laila. They were blown away when I introduced them to “Mother.” They couldn’t believe that she was six years old and that she hadn’t already won her championship. I missed seeing Jenny’s recently retired dad, Wood, who was in Portland, giving a series of lectures to AKC judges about the finer points of judging the terrier classes, when I left Modi to get the finishing grooming touches that she needed before competing.

As I wandered around the rings before the showing commenced, I ran into my friend Susan, Bloodhound breeder extraordinaire as well as a Best in Show AKC judge. This is always a good omen as seeing Susan always seems to bring good luck. I also ran into an old client who was there showing her Basenjis. But my real surprise was when I recognized the judge that had awarded Laila her second major win two months earlier at the Santa Ana Valley Kennel Club Show. I realized that Judge Boulton would be judging the French Bulldogs the next day and went over to him to once again thank him for his exquisite taste and remind him that he would be seeing Laila again. (I had thought about sending him an e-mail copy of the picture showing him awarding Laila the Winner’s Bitch title, but was advised by Susan that it was an unethical thing to do. Amazingly, I restrained myself.)

The judging of the French Bulldogs began at exactly 8 a.m. The males were judged first, and then came the females. Modi was entered in the Open Bitch class, one of the six classes that made up the entry. Open Bitch is the last class to be judged and when Modi entered the ring with her eight competitors my excitement grew. She was being handled by Jenny’s new husband, Christian, and when the judge gave his nod to Modi I was jumping up and down and clapping……..and so were some of the spectators! What do you know, Modi had a fan club. But that was only the beginning, for right after she had been awarded her blue ribbon, the winners of the five other classes came back into the ring to compete for the title of Winners Bitch. This is a very significant part of the judging for it is the winner of this round that claims the points that are awarded towards the title of Champion! I was rooting so hard for Modi, and sure enough Judge Bassett showed his keen eye and good taste as he awarded Modi this coveted title along with the four major points. But now it really got interesting as the Best of Breed competition began. This part of the competition is reserved for Champions of record as well as the Winners Bitch and Winners Dog (male), which meant that Laila and Modi would be competing in the same ring together for the first time. Modi seemed not to care, but Laila was quite a different story. Imagine if you were a contestant in a beauty pageant and you looked at your competitors and saw your own mother, your mother for god’s sake, and there she was, standing naked, save for the thin lead around her neck. What a shock! Laila couldn’t take her eyes off of Modi. Happily, her handler, Renata, recognized the situation for what it was and she scooped Laila up and cradled her like a baby. This act of gentleness seemed to have the desired effect and Laila got her head together and got back to the business of being Champion Laila. And that’s how she got to be the Select Bitch that day. What a great triumph this was for mother and daughter! What else could top this on the ensuing day? Oh Brother! Brother Boker that is!

We had more company on the drive up to the show on Sunday morning. My son Stephen had decided that this might be a good time to go to his first dog show, now that he had a “dog in the fight” so to speak. In addition, our friend, Sonia, who doubles as Boker’s mother, came to watch. I had decided to show Boker myself. We had practiced together for several times during the preceding week. Over the last year I have had an interest in not only watching the dogs, but in observing the styles and techniques of the various handlers. It seemed to me that the best handlers knew how to keep the attention of the dog and at the right moment get the dog totally focused so that an alertness in the eyes and facial expression was reflected in a rigidity and tonicity of posture. Everyone relied on baits that were constantly meted out during training and showing. We learned that Modi was a cheeser. Laila liked chicken. Some handlers have intense focus, or stoic demeanors and there are some that look like they are genuinely having a good time with the dog. Jenny is certainly in this latter category. Her dad is in a category of his own as he has the most riveting stare as he makes eye contact with his charges. In any case, I thought that I had discovered the key to obedience when I started sharing my favorite beef jerky with Boker in the course of our training. But as I’ve come to realize, the bait is just the basic part; mental connection is the cherry on top.

With Judge Boulton presiding, the momentum from the first day continued. Before the girls were shown, Boker and I entered the ring for the Open Dog class. I was amazed at how quickly Boker had regained his composure after entering the show grounds. In little over a half an hour, he had transformed himself from a wild maniac barking and rushing at all around him to a composed veteran allowing admirers to scratch his outstanding head and rub his back. In the ring he/we didn’t do too badly. A credible performance which culminated in a sit down during our last lap around the ring resulted in a third place finish….but, we’ll be back. The girls duplicated their victories from the day before with a little less drama on Laila’s part. When Laila and I got to take the victory photo with the judge, I was proud to show him the earlier picture and let him in on the identities of Mother Modi and Brother Boker.

One final ironic note. When Renata brought Laila to me after her showing she related that she and her entire team were crazy for Laila — her playfulness as well as her cuteness — and that they thought that she should be called “Pork Chop”! Of all the nicknames for a dog with the Hebrew name: Fessels Nes Gadol Modani’s Laila Tov!

For more pictures of the darling girls, brother Boker, Modi and their whole family, click the Frenchie Dog Pix and Laila & Parents buttons below! News of the next doggie show adventure with Laila Tov! And to read the story of her first great success, click here!