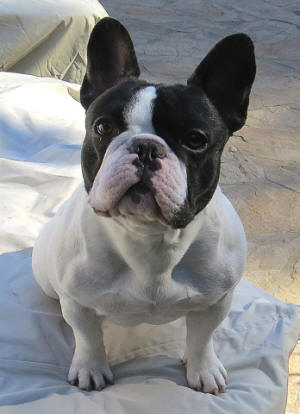 I was really looking forward to the shows in Palm Springs which were to be held on the first weekend of January. Not only was the venue beautiful — the grounds of The Empire Polo Club in Indio (coincidentally also the site of the famous Coachella Valley Music Festival) — but our hotel accommodations in nearby La Quinta were great. And we got to bring the entire family of French Bulldogs with us. Laila was on a real hot streak, having won six of her eight previous showings with five of the shows qualifying as major wins. I was in an optimistic frame of mind. These shows would really generate some impressive competition. There was an entry of seventy to seventy-six French Bulldogs entered for each day of the four days of competition. Some of the dogs had come from places like Japan, Argentina, Canada, New York and Florida. Laila would be stepping out on a bigger stage here.

One of the first hurdles to be overcome would be how well Laila would adjust to a new handler. My favorite guy, Wood Wornall, had just retired from handling and he and his daughter, Jenny, had split the duties of handling Laila. Laila was now an automatic competitor in the Best of Breed competition, but Jenny had a scheduling conflict as she was obligated to show a male champion in that round. She had arranged for a very able handler, Renata, to take her place. Laila and Renata had about an hour to get acquainted before the showing of the Frenchies commenced at 12:30 that afternoon. And although Laila showed like the champion she is, she didn’t have that extra pop that day and did not place. I left a little disappointed but knew that there were three more shows to go.

The next morning I dropped her off at 7 a.m. to be prepped for the showing that would start an hour later. I returned to the hotel to pick up my wife and returned to the Polo Grounds midway through the showing of the males. The Best of Breed round wouldn’t begin for another hour and a half due to the large entry. I was happy to run into a good friend and colleague who was attending the show with his wife. They have been breeders of the top Bloodhounds for the past twenty years and wife Susan is an internationally known judge. When I see them, invariably good things happen. Of course they were present a month earlier, on the day Laila won her championship. Today was not to be an exception and when the dust cleared, Laila had been named Select Dog! What the hell did that mean, I wondered, as people came up to congratulate me on her accomplishment.

Well, as I found out, being the Select dog is really a good thing. In a sense it seems like a consolation prize but it has all the same benefits as the other titles of Best of Breed and Best of Opposite Sex. The title of Select Dog was created a few years ago by the American Kennel Club as a vehicle for Champions that are competing for the title of Grand Champion. It is awarded solely at the judge’s discretion when there is an outstanding champion in the field that deserves to be singled out but is not awarded one of the top two prizes. The title of Select Dog earns the winner points towards the Grand Championship, as well as the accomplishment of beating other Champions of Record. But best of all, this was the first time that Linda had been present at any of the shows where Laila had won big titles — and she even got excited!

I returned to the show grounds that evening, not with Laila, but with her mother Modi. I had entered Modi in the two shows on Saturday and Sunday. Two years earlier, I had brought Modi to a show in Santa Barbara for the sole purpose of meeting Jenny Wornall and seeing if she would be interested in showing Modi for me. At that encounter, Jenny expressed her admiration for Modi, felt that she had the potential to become a champion but declined the opportunity to show her with the now famous comment, “Fat girls don’t win beauty contests.” Dieting for a couple of months did not change her girth but the ensuing pregnancy, which resulted in Laila and brother Boker, and the opportunity to play every day with two puppies with boundless energy, had slimmed her down. When I showed the now sleek Modi to Jenny she said that now we were ready, but I held off entering her until Laila had obtained her Championship, in order to avoid the direct familial competition and distractions in the preliminary classes. Modi hadn’t been shown in over four years and I wanted Jenny to check her out before she took her into the ring the next day.

The training session that evening was interesting in a number of ways. When I arrived with Modi, I found Jenny and Wood dispensing advice to a couple of Wire Hair Fox Terrier and Cairn Terrier owners in spite of the fact that their day was well underway by the time I had arrived with Laila at seven that morning. Jenny then turned her attention to Modi and tested her taste buds by offering her chicken as a bait. Amazingly, Modi turned it down; I had never, ever seen Modi turn down a snack of any kind. Jenny then tried string cheese with Modi and that was an immediate success. Modi was a cheeser! I slipped out of view and watched as Jenny led Modi through her paces. Modi looked great, walking and stacking and holding her pose like a seasoned veteran. After a few minutes, Jenny handed me the leash and said, “She’s a natural show dog, but do you think that she will go after any of the other dogs in the ring?” Evidently as they were walking, Modi had lunged at several passing dogs. Any time I have taken Modi to dog shows, I have always walked her around the grounds, through the groups of dogs for at least forty-five minutes in order for her to calm down and relax. For the first twenty minutes or so, she is like a flying squirrel on a leash as she goes after every big dog that she passes. Eventually she relaxes and behaves well, and that’s the report that I gave Jenny. I assured her that even with her combative nature, she had never attacked the dog in front of her while in the show ring.

The next morning, I dropped Laila off with Renata and proceeded to the Wornall motor home to announce that I was there with Modi but that I would be walking Modi around and around for a while. She was relaxed in about half an hour and I brought her back to the grooming area to get prepped for her debut. The prep consisted of shaving her whiskers — the clean shaven look is definitely in with Frenchies. Modi was entered in the preliminary class, Open Bitch, and would be shown before Laila and the Best of Breed competition. I was nervous and excited for Modi. I actually found myself rooting harder for her to do well than I did for Laila. She had eleven other competitors in her group and although she posed and strutted with the best of them, she wasn’t singled out for recognition. At least she had impressed Linda, who was amazed that she maintained her decorum in the ring and actually looked great doing it. When Laila and the other champions entered the ring fifteen minutes later, Laila was again singled out and received the Select Dog title. After having her picture taken with me and the judge, Linda and I, along with both dogs in tow, walked around looking in on the various competitions in the rings. We even ran into the judge that had awarded Laila her first major win two months earlier. But so many people kept stopping us and asking about Laila and Modi. It was fun to see how Linda had suddenly developed into a French Bulldog maven as she freely dispensed information and advice.

The final day of the competition was in fact a doubly special day. It was Modi’s sixth birthday! We followed the same routine as the day before. On this day, however, Modi made the cut. When the judge divided the group, she was placed with four others as the top tier dogs, and even though she didn’t get a ribbon on this day, just the fact that she was recognized made me jump for joy (literally). Laila had an off day, looked distracted and finished out of the money, but even that was OK. Overall, her weekend was a smashing success. She had garnered another ten points towards her Grand Championship and showed that she belonged in the ring with some of the top dogs in the country. But the real story of the weekend was the reemergence of Modi. We went into the series of shows focused on Laila and yet somehow Modi’s comeback performance stole my heart. I know Laila will have continued success and will get the Grand Championship she deserves, but I am just as excited for Modi to do well as she works towards a Championship in her own right. And a great mum to Laila Tov. Below, when Modi was just a pup.

Laila again was Select Bitch and now has 23 of the 25 points needed for her Grand Championship. Even brother Boker got into the act and took a 3rd place in Open Dog- we will be hearing more about him in the future.
Happy day!!

And to read the story of her first great success, click here!

For more pictures of the darling girl, brother Boker, Modi and their whole family, click the Frenchie Dog Pix and Laila & Parents buttons!

On a different note, see the videos — Laila Tov has made Dr. B a great-great-great grandad!