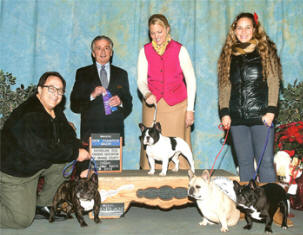 That’s How We Got The Picture!

I always knew that Laila was destined to be a champion. Most people in French Bulldog circles would logically attribute her conformational charms to her father as he was a celebrated Grand Champion. But what most French Bulldog people don’t know is the fantastic, though less decorated, lineage on her mother’s side. It was always my fantasy to have the photograph of her championship win include the three individuals that constituted the other side of the family. Yes, it was really important for Fessie, Gadi and Modi to be seen at the party.

Going into the weekend of the four shows that constituted the Shoreline/Malibu Kennel club shows at the Orange County Fairgrounds, I was confronted with a dilemma. Laila needed only one win to obtain her championship status. There was no guarantee of her winning on any specific day and so I was in a quandary about how and when to transport the four dogs, and how to maintain control of them at the shows. To arrive at the shows by 7 A.M., I had to leave my house at 6 A.M. I tried to coax my friend, Chuck, into coming with me for the first show, but he was able to come up with a reasonable excuse not to go. I decided that under those conditions I couldn’t risk the breakdown in decorum that Modi and Gadi were likely to supply, and that I would do the next best thing and wear a tee shirt that was decorated with a portrait of the three dogs. If Laila was lucky enough to win the show and her championship at the first show on Friday, I would simply stand behind her in the picture with my chest puffed out, sporting the picture of the three adults. I figured that it was better than nothing.

But then the b’shert moment came. Normally, pictures of the winning dogs are taken immediately after the awarding of the ribbons, but on this day there was to be a detour. Due to the hectic schedule of both the judge and the handlers, I was offered a choice: we could wait for a couple of hours until time became available or we could do the pictures on the following day! The following day sounded pretty good to me. I knew that it would be a sure thing that Fessie etc. would be there for the championship picture and that best of all, my daughter Hillary was going to be coming to the shows on Saturday and would be able to help me maintain control so that there wouldn’t be a scene from Dogs Gone Wild.

Normally, when I go out, I rarely dress myself. My wife, Linda, has been making me presentable for the past thirty five years. While she was visiting daughter, Dr. Melanie, in New York, this week, I have had to fend for myself and after seeing me in the same sweat suit for three days running, Hillary asked if it was my new uniform. I knew that I would need to be more presentable if I was going to be in a picture with my pack the following day. Ironically I was in the closet trying to figure out an outfit to wear — something I never do–when Linda called on Friday night, but this was a really special occasion.

I met Hillary early Saturday morning and we proceeded to the show grounds with the four dogs in the back seat. Hillary’s original motivation to go to the show was not necessarily to be of help to me. That was conveniently an offshoot of her real reason for going. Her dog, Bella, was diagnosed two weeks earlier with a nasal carcinoma and had successfully undergone two Cyber Knife, radiation treatments the week before. Hillary was going to the show to talk with a number of friends and show people who travel with their animals, to get tips on how to certify Bella as a service dog so that she could travel in the airplane cabin on an upcoming trip to Mexico. But by the end of the day, it was obvious that I couldn’t have accomplished what I set out to do if it hadn’t been for all of her help and that 99% of her time was taken up in being indispensable.

Laila was left with Wood and Jenny at their work area which was adjacent to the building where the French Bulldogs were to be shown in ring 1 at 8 A.M. I had also brought a portable kennel, in case Modi or Gadi misbehaved and needed a time out, which I set up near the ring. On the walk from the parking lot to the show area, Hillary maintained good control of the two banditos who sporadically lunged at passing dogs. Fessie remained aloof and imperturbable. We found two seats near, but not too near, the ring. Coincidently, we found ourselves right next to the official photography site. I had some unfinished business to conduct as I was carrying a set of photos which had recorded Laila’s major win at the Antelope Valley Kennel Club show four weeks earlier. The flaw with the photo was that it mistakenly proclaimed this win had made her a “New Champion.” As prescient as that moniker would be, for the sake of posterity, it would need to be airbrushed out. I also reminded Vicky, the show photographer, about the makeup photo shoot from yesterday’s win, and explained my fantasy involving Fessie, Gadi and Modi being in the picture. Reassuringly she was happy to do it and reassured me that it wasn’t so unusual a request and that “you can’t do it by yourself.”

Meanwhile, the showing of the French Bulldogs had commenced. Because she was now a champion, Laila did not have to participate in the preliminary rounds of showing and was able to proceed directly to the finals where the Best of Breed honors were to be awarded. This decision was made following her win the day before. There is an etiquette involved in dog showing that adheres to the adage, “Don’t break the major”. What this means is when you have the option of moving your dog up and bypassing the preliminary groups in shows immediately following the championship win, it would be regarded as a shonda, or unspeakable shame, to skip the prelims, when by doing so, the entry would be decreased by enough to lower the value of the win to something below a three point major. After having discussed this with several of the other owners, I was given their blessings to make the upgrade as it wouldn’t “break the major.”

Well, Laila’s debut as a champion was a great success as she was awarded the title of Best of Opposite Sex. This win provided her with the first step in her quest to become a Grand Champion. We proceeded to the photo area and had the picture taken of Laila, handler Wood Warnall and Judge Shoemaker. I then went to ring 3, where Judge Rella, was judging Miniature French Poodles and reminded him that we had a photo, in fact, THE PHOTO, to do. We agreed that we would meet with the photographer and handlers at the beginning of the lunch break about 90 minutes hence. To kill time, Hillary and I took the four dogs on a leisurely walk through of all things, a flea market that was being held on grounds adjacent to the dog show. We returned to the photography area about ten minutes before the appointed time and while Hillary sat with the dogs I went around reminding one of the Wornalls to be there and then set off to catch Judge Rella as he came out of the ring and escort him to the shoot.

When I finally arrived with Judge Rella, the final piece of the puzzle was in place. Hillary and Jenny were standing with the dogs ready to proceed. The crowd around the photographer’s podium had grown much larger and as the subject of the previous photo alit from the stand, there was a palpable surge of the crowd. But Jenny saved the day! “We’ve been waiting and we are next”, she proclaimed with the vigor of one who is pressed for time. We scrambled to our places on and in front of the podium and amid the surrounding tumult we got the picture that I had been longing for.

When I look back at the effort that was required to make it happen and when I think about Laila’s new title of Champion, it somehow gives conflicting connotations to the phrase “What a Bitch!”

Happy Note: This article appeared in The French Bullytin, Vol. 29, No. 2.

To read the story of her first great success, click here!