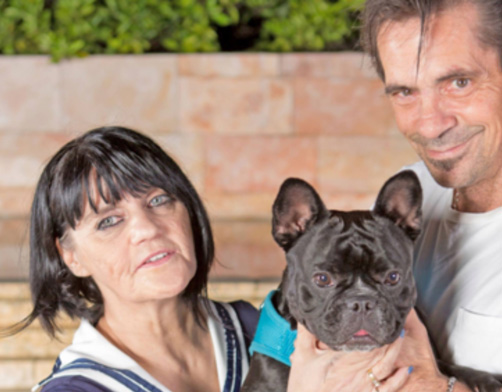 My fur kid is a bubbly 3 year old female French Bulldog called Absinthe (Abbi). Suddenly late one Friday night she became uncomfortable and could not settle down. I took her to a local vet in the Downtown Area. We did test after test. Meanwhile, Abbi was getting more and more uncomfortable each day. Finally I was told she had elevated enzymes and had pancreatitis. We purchased the medications needed and also purchased the food they sold, as we were told we needed to completely changer her diet. I was not comfortable with the diagnosis as Abbi had none of the other signs for pancreatitis like vomiting and loose stools. Abbi continued to get more and more uncomfortable and was now not eating or drinking.

By now I had run up a bill for $1500, and yet my dog was still in pain. So I took her to another vet, this time in Koreatown, for a second opinion. Again was told it was Pancreatitis. Vet put some fluid under the skin to re-hydrate and suggested to put my mind at rest to go to a special care Hospital in Culver City where they could do an ultrasound for me. To be 100% sure it was pancreatitis. So off I go to yet another vet who does an ultrasound and more blood tests. I am told yes she has slightly inflamed pancreas and continue with the treatment and hydration. They want to admit her. But I say no I will hydrate her myself at home.

By the time I get home, Abbi’s pain is even worse even though she had been given a pain shot. During the night it gets worse and worse, so I rush back to the 24 hr special care hospital. Where they now inform me they are admitting her and for me to come back for a consultation at 10 am. At the consultation they now inform me it is not pancreatitis, that she is having neurological problems and that her spinal cord is being damaged by a slipped disc. I demand to see her and even though she had walked into the hospital herself, she now was dragging her back legs, which were all bent and twisted. I am a nurse so I demanded her chart. They had been giving her a drug that shuts down messages from the brain. Which I made them change. They wanted to do an MRI followed by Back Surgery. The MRI tech was not going to be there until the Tuesday (4 days later). So they were keeping her medicated until then. She was now on Methadone.

After the 2nd day of her admission, I could not stand it anymore. She just kept getting worse and worse. I removed my dog and took her home. As the medications started to wear off, her leg dragging stopped and she was walking properly. I called Dr. Baum and made an appointment to see him. Then crate transported her to where I should have gone in the first place. To Dr. Barry Baum.

Dr. Baum had been Abbi’s Vet since she was born until she was 2 years old. I had started going elsewhere because I had moved to the Downtown Area. The traffic between Downtown Los Angeles and Culver City can be harsh. So I thought it would easier to just walk her locally. How wrong I was. Dr Baum examined Abbi and then patiently pointed out and explained all of his findings from the X-rays and test results the other Vets had completed on my dog. Not once, NOT AT ANY TIME, had any of the other vets given us such consideration.

After his examination Dr. Baum administered a steroid shot. To reduce the small area of pinching the x-ray showed. He put her on light, controlled exercise and crate rest and scheduled a follow up a week later. Even before we had got home Abbi was drinking water. She ate some food as soon as she WALKED into our house. And by the morning she was walking, eating and drinking normally. She continued to get better day by day. In the end she required 2 weeks of light exercise and cage rest. Then slowly we re-introduced her to normal activity. But remembering to restrict her jumping down from furniture and heights in the future.

Dr. BB saved my dog. And I will never complain about the traffic again. The Center-Sinai charges were a pleasure after the thousands I had spent.

This is an animal hospital where they honestly care about your pet and are not just about the dollars they can make from you.