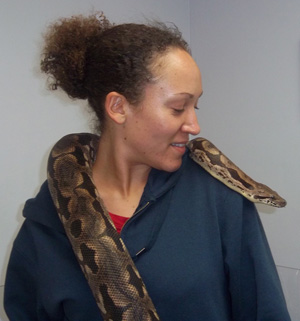 Dr. Baum is AMAZING! MY SNAKE ATE TONIGHT for the first time in six months!!!!!

And I was really getting super stressed and worried about him. About two days before I moved here, I went to a vet in Arizona about this same issue.  All that doctor was talking about was x-rays and blood work and up charges, up charges, up charges. At first I thought that doctor was right on and knew what he was talking about (which I’m sure on some level he did/does), but Dr. Baum LITERALLY saw my snake for five minutes and was able to diagnose him! The other doctor did not catch the fact that I’ve had some pink dots on his belly scales, showing he had an infection. After Dr. Baum looked in Iwe’s mouth and saw that everything was great, he simply looked down and said, “He hasn’t always had this pink line down his belly, has he?” I replied that I didn’t believe so and remember his belly being very white. Dr.  Baum said, “Yup!  He has little red spots going all down his belly. He just has a little infection, nothing major to worry about. And all he needs is some antibiotics.”

I knew in my heart of hearts that all he needed was antibiotics, and had this been caught in Arizona, Iwe would have dined a month ago! But all that is in the past and I’m SOOOOOOO HAPPY I’ve found CSAH and Dr. Baum (though I hope I don’t have to go to him too often.)  🙂  PLEASE let him know that he has saved me a LOT of worry and has eased my heart and mind, more than he’ll ever understand. THANK YOU ALL for such AWESOME work on my baby, and I/we thanks you, too! 🙂