How Can I Avoid Acting Rashly – My Cocker Spaniel Has a Rash! 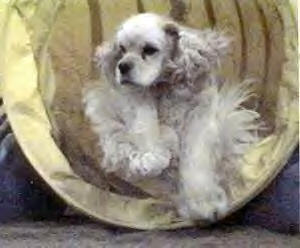 No, this grand champion is, thankfully, not suffering from a Cocker Spaniel rash! She is International and American Champion S’Posan’s Intoxikator, NA, NAJ, CGC. Photo by and courtesy of Sandy Roland, S’Posan’s Cockers sandy@sposan.com. Thank you, Sandy, for sharing this wonderful photo of a fine lady of the cocker spaniel persuasion. Read on to insure your own fine pal remains rash-free! P.S. We’ve just got an update from Sandy. Since this picture was taken, “Katy” has gone on to win her OA and OAJ titles. Way to go, Champ!

My dog’s got a really bad skin rash on his upper back and stomach. We have given him antibiotics, and that helped, but a few months after we stopped giving them to him, the same skin rash returned. We tried changing his food and it makes no difference. What may I do to help my little pooch? (3-4 yr old Cocker Spaniel) 🙁

Well, you certainly have the right breed to be afflicted with the kind of dermatological problems that you described. Cocker Spaniels, indeed all the spaniel breeds, are prone to a variety of skin conditions that ultimately manifest themselves as oily seborrheas. This condition typically presents as an oily, flaky coat punctuated with multiple rashes which appear as raised red dots as well as circular peeling lesions. Very often there is a concurrent ear infection present.

As you learned, it is not too difficult to remedy the situation at hand, but what is difficult is to control the tendency for constant recurrence. Some of these dogs may be hypothyroid (low functioning of thyroid gland) and a simple blood test will determine if they need thyroid supplementation.

In most situations, the condition is triggered by allergies that initially inflame the skin, causing increased flakiness and increased oil production by the sebaceous glands. The increased oiliness of the skin allows the proliferation of the bacterial population which in turn causes secondary pyoderma (infections in the skin, i.e. acne). Treatment is directed at clearing the secondary problem of the pyoderma with antibiotics (Clindamycin is my favorite at this time), as well as frequent bathing with shampoos to remove the excess oil (Benzyl Peroxide). At the same time, treatment for the allergy with anti-inflammatory drugs (Triamcinolone or Prednisolone) should be initiated. Depending on the level of chronicity, it should take anywhere from two to six weeks to clear up the problem.

Long-term therapy is aimed at controlling the inciting factors of allergy by use of antihistamines or low doses of oral Prednisolone. Frequent bathing with mild hypoallergenic shampoos as well as good flea control is also essential. The ultimate maintenance dose of oral medication should always be the least amount that keeps the problem under control. Of course the dose can fluctuate due to seasonal and environmental conditions such as increased pollen counts and Santa Ana winds. Maintaining these types of skin problems is a lifelong commitment.