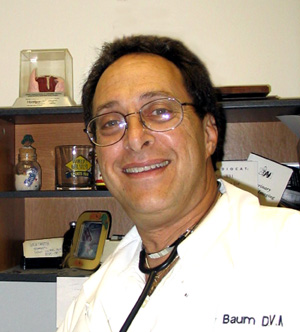 Dr. Barry M. Baum achieved his Doctor of Veterinary Medicine from Cornell University in 1971. His undergraduate degree was granted by the New York State College of Agriculture at Cornell.

He has been the owner and Chief of Staff at Center-Sinai Animal Hospital, Los Angeles, California since 1979.  The hospital has been serving the Los Angeles community for over thirty years.  Under Dr. Baum’s guidance, Center-Sinai has grown from one doctor with a five person support staff to a six doctor practice with a support staff of thirty-five people.  A full range of services from medical and surgical care to boarding and grooming is provided seven days a week.  The hospital staff actively works with rescue groups seeking to find homes for dogs and cats.