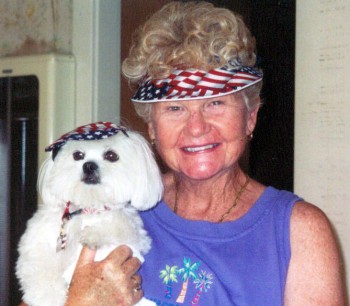 Mabel Bourne was a client I inherited when I bought Center-Sinai Animal Hospital in 1979.  She was an elderly lady who owned an ancient apricot poodle whom she adored.  Mabel lived within a few blocks of the animal hospital, and as she was too old to drive she would walk to the hospital pushing a shopping cart that was specially rigged out to carry her beloved Coquette.  It was quite a sight to see —  old Mabel pushing the cart (not the type used in the supermarkets, but the type you would use to carry your purchases home from the market) which was piled up with pillows and perched at the top was Coquette.  I always imagined the cart to be Coquette’s personal and portable throne.

It is often said that owners and their dogs start looking alike.  That was certainly the case here.  Both had off-white/rust colored hair.  Mabel’s mane, pulled back into a bun, resembled the pompoms that Coquette sported.  But perhaps the most striking similarity was the gaunt facial look that occurs when there are no teeth in the mouth — the toothless pucker which accentuated the cheeks of both females.

Mabel and Coquette were frequent visitors to the hospital, in part because of Coquette’s recurrent allergies, which caused her to scratch and chew on herself, and in part because Mabel was obsessively devoted to Coquette and used any excuse to bring her in for exams.

As I became more familiar with Mabel, she started to share information about her home life.  I learned that Coquette was treated as a deity, and that Mabel’s entire life revolved around caring for her pet. Mabel showed me pictures of her modest apartment and pictures of Coquette’s own area. In essence, there was a shrine set up for her, complete with a red velvet throne surrounded by votive candles.  All the pictures that were displayed were of Coquette, a veritable anthology of her life. As I viewed the pictures and chatted with Mabel, the thought occurred to me — what will happen to this nice lady after her dog passes away?  At eighteen years of age, with organs starting to fail, Coquette could not go on forever.

Surprisingly, Coquette lived to see her twentieth birthday. Mabel celebrated the event in grand style, lavishing on Coquette a birthday party complete with an Alpo cake and candles, as well as party hats for all the canine friends who had been invited.

Alas, no one lives forever, and soon afterward Coquette died in her sleep at home.  I felt so bad for Mabel.  I called her every day for the next couple of weeks as she made arrangements for the disposition of Coquette’s body.  She had decided to hire a taxidermist to bring Coquette back to her former self, and that is exactly what happened as the restored Coquette resumed her place atop the shrine.

Eventually, I asked Mabel if I could help her to find another dog so that she would be able to once again have the companionship she had obviously enjoyed and thrived on.  Her answer surprised me then, although as time has passed and I have grown older, I can relate to her concerns.

“Dr. Baum,” she said, “I can’t get another dog ever again. I am so old myself that any young dog that I get will outlive me and what would become of her then?”

When you are in your early thirties, your life seems infinite and the concept of being survived by a pet had never occurred to me. Twenty-five years later I definitely have a different perspective. I asked Mabel if she had any relatives or friends that might consider adopting her dog in the event that she passed away. I learned that she had son who lived in Orange County and some neighbors who regularly looked in on her.  She gave me the phone numbers to contact them.

When I contacted all the parties, it was gratifying to hear their responses. They were all very concerned for Mabel’s well being. But while all had advocated for a new pet for Mabel, none realized her real reason for declining the proposition. I informed them that she was concerned about a new pet being orphaned, and they all volunteered to be adoptive parents should the need eventually arise. When they told Mabel about their intentions, she was very relieved, and consented for me to contact the pet rescue groups to find her a new Coquette.

Life works in funny ways.  No sooner had Mabel given her consent to the procurement process, than a miracle occurred. A client walked into the hospital with an eight week old apricot poodle and placed her on the reception counter.  As she was about to fill in the client information sheet she paused, asked the receptionist to hold the puppy for a second while she ran out to her car to get her wallet. She never came back! The car sped out of the parking lot and we were left with an adorable puppy. In fact, it could have been Coquette’s clone. I’m very big on the concept of b’shert — a Yiddish term that means, it’s meant to be. It was b’shert that this puppy was abandoned here, especially when we were trying to get Mabel a new companion. I’m happy to say that Mabel was at the hospital within minutes of my call to her and she proudly escorted her new friend home in Coquette’s mobile throne.

Mabel lived for eight more years.  I didn’t get to see her nearly as often, as her young Coquette was healthy and didn’t need the medical care of old Coquette.  I learned of her death from her son who called to tell me the news and to thank me for enhancing the quality of his mother’s life. Young (well, by now middle aged) Coquette had moved to Orange County to spend the rest of her days with Mabel’s son and his family. I always love happy endings.