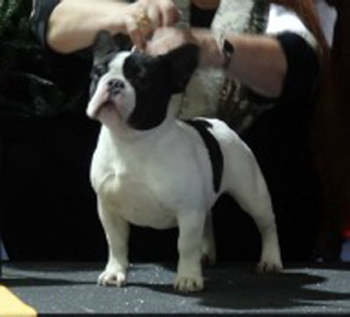 After Laila’s great successes in her initial series of shows as a six to nine month old puppy, we returned to the show ring with great expectations for her as a nine to twelve month old contestant in her first Big Girls French Bulldog show.

Unfortunately, in spite of her great looks and exemplary behavior in the ring she failed to claim any of the top spots in the four days of competition held at Industry Hill Expo Center in the City of Industry.

What struck me as odd were decisions by judges in their choice of which dog was awarded the coveted title of Best of Breed. The Bench shows that we attend are strictly beauty contests, and while the personality of the dog can lend a certain panache, the contest is supposed to be waged primarily on the physical attributes of each contestant and how strictly they conform to a set of breed standards. Things like conformation, size, gait, color and hair coat are but a few of the major considerations.

The particular male dog that won the breed title in several of the shows that weekend was by many accounts a fine specimen of the breed. Broad shouldered with a flat top line and a finely sculptured square head, this dog had deservedly earned his Champion’s title.

What made his selection as Best of Breed, on these days, a somewhat dubious proposition was the state of his hair coat. Most of the bystanders that were observing the competition, myself included, noticed something strange. It was hard to put your finger on it, but it was there, and everyone could see it. (Presumably even the judge!). The rumors began to circulate, “That dog is covered in hives,” said some. “That dog is covered with pimples,” said others.

As the dog was led from the ring following his coronation, I ran over to the handler and owner and asked if I could take a look for myself. “So many people are saying so many things about this dog, do you mind if I have a look at him?” With their approval of my doing a brief exam, I was able to ascertain what was causing the mysterious appearance. Indeed, there were no skin lesions, but there was a peculiar pattern in how the hair was growing. The coat was full but there were patches of hair that were growing to different lengths that were interspersed with each other causing the coat to have a variegated look.

Upon sharing my findings, his owner revealed that that was precisely the cause of the mottled appearance and that her boy had been diagnosed with condition that bore the mysterious name of Alopecia X.

I had been familiar with this disease for several years but had never seen this variant presentation. Diagnosed through skin biopsy in combination with an assay of the hormones made by the adrenal glands, Alopecia X is the name given to a variety of dermatological conditions in which the pattern of hair growth is altered. There are a number of draconian treatments involving the suppression of the adrenal gland that can be tried, but due to the potential for serious side effects from some of the medications, combined with the fact that the condition is cosmetic only, most cases are treated with melatonin (yes, the same melatonin that helps you sleep). This benign treatment actually helps in forty to fifty percent of the cases.

Anyway, I left the show grounds with a deep sense of disappointment. But what better way to assuage the disappointment than some comfort food on the way home? And what better comfort food than fresh donuts! The real prize of the day, as it turned out, was the discovery of the apple fritters at Rainbow Donuts on Azusa Avenue in West Covina. So delicious was this confection that I dared bring home half of the fritter, assuring that my transgression would be discovered by my wife. The irony here was that Linda had started a raw foods vegan diet the week before. Her reaction to being urged to sample the fritter is yet another story.

For more pictures of the darling girl and her family, click the Laila & Parents and Frenchie Dog Pix buttons! Stayed tuned for more doggie show adventures with Laila Tov! And to read the story of one of her great early successes, click here! And a new win — Best of Winners! And now, Champion!

Laila Tov becomes a Mommy! See the videos! And track the kids’ progress on our Facebook page!