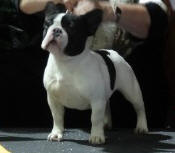 Last weekend I drove up to Ventura to exhibit Laila, my seven month old French Bulldog puppy, in two AKC shows. I had to leave my Bel Air home before dawn in order to bring Laila to the professional handlers that would be showing her for me. I had been a little concerned about the drive for several reasons, the main one being deteriorating vision due to cataract formation in my left eye. Compounding the vision issue was the early hour’s shroud of darkness, combined with a driving rainstorm. Nonetheless, both Laila and I got there safely and early enough for the handlers to have some time with her before the eight a.m. show.

I settled into a ringside chair in one of the two buildings that would be used for the contest, each containing four rings. Because I was so early, there were only three or four other people in the building. I opened up my copy of the NY Times and immediately went for the challenging Saturday crossword puzzle. As I was filling in the words, the hall began filling, with other exhibitors and their dogs. I saw several familiar faces and joined in their conversation. At five to eight, an American flag was raised and a woman sang a beautiful rendition of the Star Spangled Banner. At that point the show began.

The judge presiding over Ring 5 was a provisional judge, and it was the first time that he wielded this power with French Bulldogs in an official AKC show. As the decisions are often very subjective, I wondered how my Laila would fare with a judge without a track record. It was my good fortune to be sitting next to an AKC official who was busily making notes in the margin of the official show catalogue. He was very friendly and was surprised that I had taken time to check on the background of the judge. His presence at this ring, at this time, was a direct result of the provisional status of the judge, for he was there to judge the judge! Evidently, during a judge’s provisional period, he is asked to justify his selections and explain the criteria that he used to place the winners. In my opinion he did a pretty good job, having selected Laila as the best puppy and placing her as first runner up among all the females in the competition. (Even though I thought that Laila was the Best in Show). Our day was complete and we headed home, ready to return the next day.

The early morning drive on Sunday was less precarious than the previous day’s trip. For one thing, the rain had passed and we were treated to a beautiful dawn as we drove up the coast. After dropping her off with the handlers I proceeded to the hall where the show rings were being set up. On this day we were scheduled for Ring 4, which was in the other arena. Once again, I got a ringside seat, started my Sunday NY Times crossword and waited for the day’s events to transpire. By the time the National Anthem was sung there were probably about two hundred people in the hall. Respectfully, everyone stood up and fixed their attention on one of the corners inside the building. Although I looked in the same direction, I couldn’t find the flag. I began to feel anxious. Did I now have a blind spot? What was everyone looking at? Where was the flag? I grabbed the guy standing next to me to ask whether he could see the flag. He was as bewildered and disoriented as I, which was of some comfort. I kept looking around the room all the while wondering why the entire group of people remained focused on the one corner. A corner without a flag! The anthem concluded and the show began.

Fifteen minutes later, the answer to this enigma was revealed. There were two halls, two vocalists, two sound systems, but only one flag. And on this day the one flag was in the other hall……thank goodness!

The next twist of this tail!

For more pictures of the darling girl and her family. click the Laila & Parents and Frenchie Dog Pix buttons!

Laila becomes a Mommy! See the videos!!! And track the kids’ progress on our Facebook page!