In loving memory Paco, My Puppy 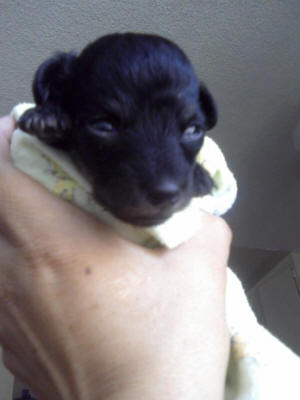 It has been about a month now since I had to let go of Paco. He first came into my life right before my daughter’s high school graduation last June. He was the perfect distraction. I tend to get worked up and anxious when big events come along in life. I needed him as much as he needed me.

Paco’s head was so swollen that you couldn’t feel his skull. He was about 10 days old. He “screamed” the first 48 hours that I had him. It was difficult (to say the least) for my family (people and pets alike) to have to deal with, but I wasn’t going to give up on Paco. When he was barely eating (at about 4 days after he came home), I almost decided to put him down. I asked the vets what they thought and there was only one hope — some fluids and a couple of steroid injections. It worked. The swelling on his head went completely down, he started eating more. He would only “scream” once in a while.

Paco went with me everywhere until he was about 3 months. That is when he finally got weaned from the bottle! (All of the other pets that I have rescued were usually ready by 5-6 weeks old.) As he began to grow he would have little “fits” once in a while as well as some good “playtime” with my other two dogs. It was a feeling I will never forget — the happiness I experienced seeing him thrive and interact with my family. I held onto those feelings as much as possible and was constantly trying to ignore the “screaming” and “fits” that were still taking place off and on, here and there. It was late November/early December when he stopped eating well for me. Then he began to do more “screaming” and have more “fits.” This time I felt different. I began wondering if he was suffering and wondering if I were being selfish. I asked my family what they felt. It all came down to the same thing. Paco’s quality of life was not going to get any better. He had a brain injury sustained at nearly 10 days old that no medication could fix. I had to let him go, peacefully, with dignity. It was one of the hardest things that I have had to do in my life. The bond that I had with him, the one that I am blessed to have shared with all of my pets (alive and passed on) is so strong and so rewarding that I know I would do it all over again.

Thank you, Paco. I truly loved you. You will always be in my heart.