Help! What Dr. B Likes about Being a Veterinarian 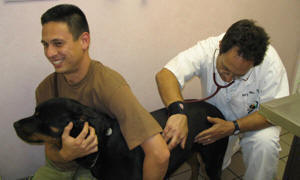 I owe my daughter, Melanie, the most heartfelt thanks for helping me to discover something really basic about myself.

In response to a fourth grade assignment, she advised me that I was to be the subject of an interview.  I was delighted at the prospect and immediately sat down at the dining room table where the interview was about to begin.  It was the simplest of interviews, consisting of only two questions.

“Dad,” she began, “what do you like most about your job?”  In twenty-three years of practicing veterinary medicine, amazingly enough, I had never been asked that particular question.  People usually asked and answered their question before I had even had a chance to respond.  “You must love animals,” or, “You must love being a veterinarian,” they would state.  They were right, but now I was being asked to focus on precisely what it was that made my occupation my avocation.

At first, the answer was not obvious, but suddenly I was saying, “Melanie, I think that what I like the most is that I get a chance to be helpful– I just love being helpful.”  Sure enough, my day was constantly filled with sick animals and apprehensive owners — and ninety-five percent of the time I could remedy my patients’ maladies and assuage the frayed nerves of their human companions — how terrific!!

The second question was immediately forthcoming.  “What don’t you like about your job?” Melanie inquired.

“The rest of the bullshit,” I answered, rather wryly, I thought.

“Dad, I’m in the fourth grade;  I can’t say that,” giggled Melanie.

“Exactly,” I said with a big grin spreading across my face. “But remember, every job has its nonsense, so hopefully the basic things that you like about your job will make up for anything else.”

The basic truths that emerged from our discussion recur to me almost every day, but the results of getting to help people and their pets are sometimes hard to predict.  For example, a woman came in one day with a problem relating to her dog’s urinary tract.

Urinary incontinence is a commonly seen affliction in older, spayed female dogs.  The biomechanics of this problem are really quite simple.  Estrogen is a hormone produced by the follicles in the ovary.  When a female is spayed, (the technical name for the surgery is an ovariohysterectomy—this means that the surgeon is removing (ectomy) the ovaries (ovario) and the uterus (hyst- as in hysteria—thank you Sigmund Freud)).  Hormonally speaking, the effect of the ovariohysterectomy is to drastically reduce the blood levels of estrogen.  Besides the obvious secondary sexual effects that estrogen controls, there is the not too obvious effect of maintaining the tonicity of smooth muscle in the body.  Smooth muscles physiologically function unconsciously — they supply the mechanical functions of muscle without our minds having to take up time to think about our homeostasis (keeping things in balance).

In this instance, the critical anatomic location is the sphincter muscle surrounding the urethra.  The normal effect of contracture of the muscle is to prevent the flow of urine from the urinary bladder to points external to the body.  The net effect of relaxation of the muscle is to allow urine to exit the bladder.  Relaxation is good when you want to be able to urinate, but when you are relaxed and don’t want to urinate— now there’s the problem.!!

When a client brings in a pet, almost always a middle aged (seven year) or older, spayed female dog, the main complaint usually centers on the fact that they are finding moist spots that smell like urine in places where the dog usually sleeps.  When a routine urine test is performed and all the findings are normal, a presumptive diagnosis of hypoestrogenism (low blood estrogen) leading to urinary incontinence can be properly made.

The simple remedy for this condition is to place the dog on an estrogen supplement given at regular intervals.  As the leaking stops, the dosage of estrogen is gradually reduced to the least amount that is required to keep the condition from recurring.

Occasionally, the initial dose of estrogen may cause some patients to show the external signs of being in heat.  As luck would have it, this reaction happened to a fourteen year old miniature French poodle, appropriately named Coquette, who happened to be owned by the parents of a former girlfriend.  Coquette’s reaction to a single dose of one milligram of des, was to evince signs of full blown heat within twenty four hours, sneak out of her owner’s yard, only to return a few hours later, having lost her virginity to a ragamuffin terrier who dotingly remained by her side.  Coquette’s tryst was short lived, as her young lover wore a collar with a name tag that allowed us to locate his owner and return him to his owner.  To my knowledge, Coquette has never seen him again — he has never phoned or written, but at least his owners’ had the good sense to send flowers the next day!

I had always assumed that by rectifying these incontinence problems, that I was simply helping to alleviate a problem which was, at the most, a minor inconvenience.  Little did I realize how important this cure would be for one of my clients.

My client was a young woman who had been to see three other veterinarians over a two-year period.  She was armed with reams of medical records- all having to do with her elderly dog’s urinary problem — as well as a tale of woe relating to her dog’s incontinence.  She related that her dog had been her bedside companion for years, but that as the incontinence had worsened she had relegated her companion to a blanket on the floor adjacent to her bed.

On the several occasions that she had sought veterinary care, she had been told that the dog had a urinary tract infection.  Although she had faithfully administered the antibiotics that had been prescribed, the condition still persisted.  She was very saddened and kept emphasizing how lonely she was in bed.  (At this point I began to be concerned about whether she was hinting that I should become the dog’s surrogate.)

Immediately after hearing her story, I optimistically told her that I felt that her dog had a problem that was easily solvable.  After obtaining and testing a urine specimen, which showed no sign of infection, I advised her to start the dog on an oral estrogen supplement.  She thanked me profusely, promised to call me in two weeks, gave her friend a big hug and a kiss with the expectation that they would soon be reunited and snuggling on her bed.

Two weeks later, she called to inform me that it had taken about a week for the medication to stop the leaking and that so far it hadn’t recurred.  I instructed her to reduce the dosage and to call me again in two weeks.

Faithfully, she called me again two weeks later.  This time the conversation went beyond a simple report as to the cessation of the incontinence.  She told me that I had changed her life!!  Her dog hadn’t wet uncontrollably again and now that they could sleep together, she had gotten the courage to evict her “no good boyfriend.”  It seems that her aversion to sleeping alone had led her to tolerate a relationship which was abusive and unfulfilling.  Her fear of sleeping alone had forced her to endure “this bum.”  She continued, “But thanks to you, Dr. Baum, I’m rid of this idiot forever!”

I was both relieved and happy to have been of help.